“Diana Alouise has always possessed this ‘Forest Gump-like’ ability to stumble into outrageous situation and come out on top. Her life story unfolds like modern day version of Shampoo meets Sex in the City with, maybe not 50, but at least 25 Shades of Grey.”

“Every once in a long great while, a book of staggering truth told with wit and searing disclosures seems to rise from the muddy  banality of confessional drivel known as “memoirs.”  While most memoirs are little more than narcissistic pleas for attention, Diana Alouise’s is of another breed, told with the same rawness and unflappable spirit that must account for her unquestionable optimism in a town that often takes pleasure in decimating it. In the twisted land of Hollywood where dreams, vices and sex merge into a yummy cocktail of both the absurd and comical, Diana Alouise has had her hands in the blender and invented her own recipe with her inimitable wit and sassy courage. Everyone who has ever caught the Hollywood bug will recognize themselves in Diana’s audacious memoir, filled with both the beauty of the dreams and the reality of the nightmares that is Hollywood, USA — the greatest factory of fantasies feeding our restless imaginations. And for all those who never dared to enter the battlefield, reading Alouise’s book will both ignite your senses and confirm your worst fears.”

“Comedienne Diana Alouise is on a one-coiffeuse quest to reintroduce the mullet back into pop culture while cutting and weaving with scissors, comedy, and commentary!” 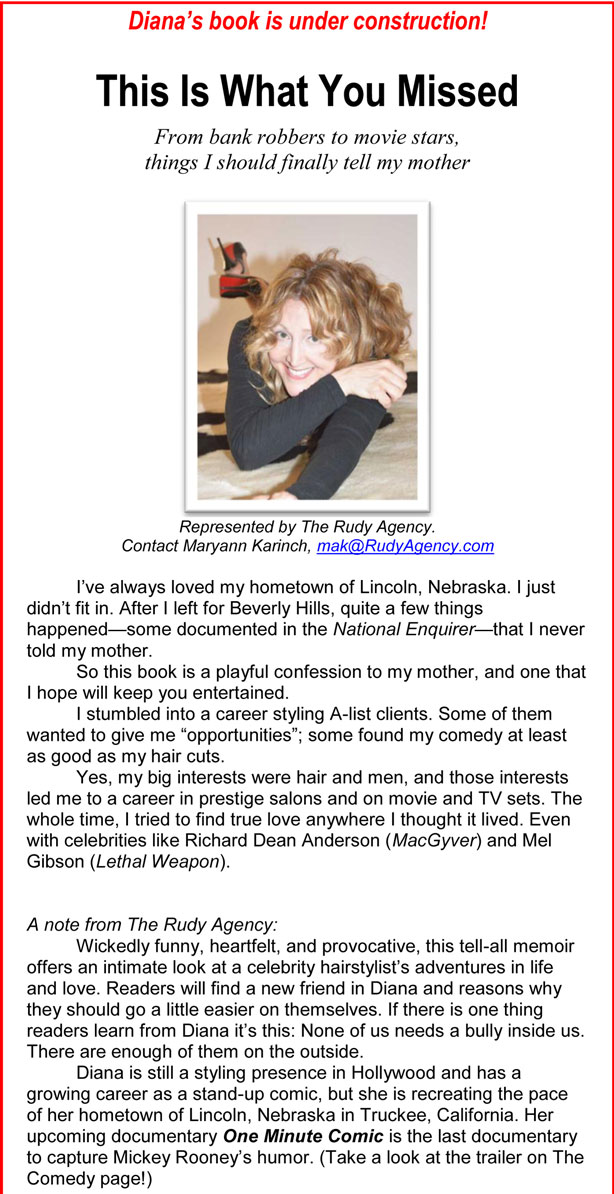 Pictured here with Jon Voight, Diana was participating in a charity event at the Ronald Reagan Presidential Library that drew a number of celebrities devoted to support of veterans. At her table at dinner were Voight, comedian Dana Carvey, and actor Gary Sinese, whose foundation provides programs for current and former military personnel and first responders. Events like this have been an important part of her life, particularly since losing her fiancé to the war in Afghanistan. 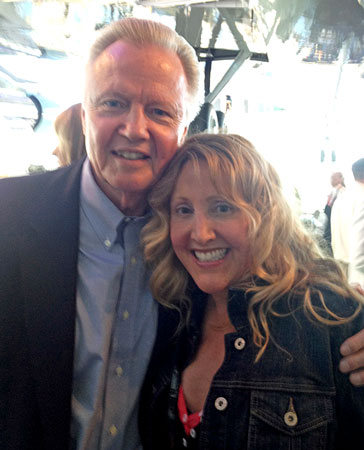 In sharp contrast to the comic and sometimes risqué tales in her memoir, the story of love and loss of Sergeant Phil Bocks is heartbreaking. Here is a snippet:

“Don’t worry about me, Diana. I’ll be fine and back here before you know it.”

I stood in front of Phil’s coffin, tears in my eyes. My body ached with sadness and disappointment as I took a final look at the man who was going to be my husband in two months. I wanted to remember him smiling, laughing, breathing.

Phil and I met and fell in love and, just when things were at their best, he was sent to Afghanistan to fight for our country. On the night of November 8, 2007, after dropping off medical supplies and food to a remote Afghan village, he and his band of twenty-seven Marines (including the nephew of New Zealand’s Prime Minister, Helen Clark) were ambushed while hiking through a deep, rocky canyon.

Phil was first shot in the leg but refused medical help from his men because he didn’t want to slow them down. Injured, he continued on. Then he was shot a second time. The bullet pierced his heart. When Sergeant Phil Bocks died at age 28 in the dark, on a cold mountain in Afghanistan, I lost my lover and my best friend.

The Marines lost a hero that day, and I lost my hero. For the rest of my life, not a day will go by that I won’t remember Phil and how he sacrificed his life for our country and the people of The United States of America.

A Sampling of Story Highlights